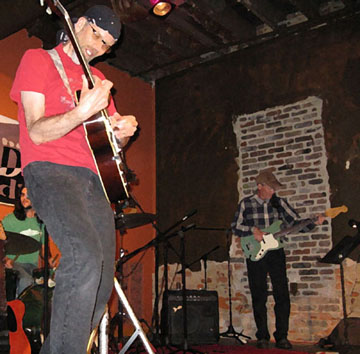 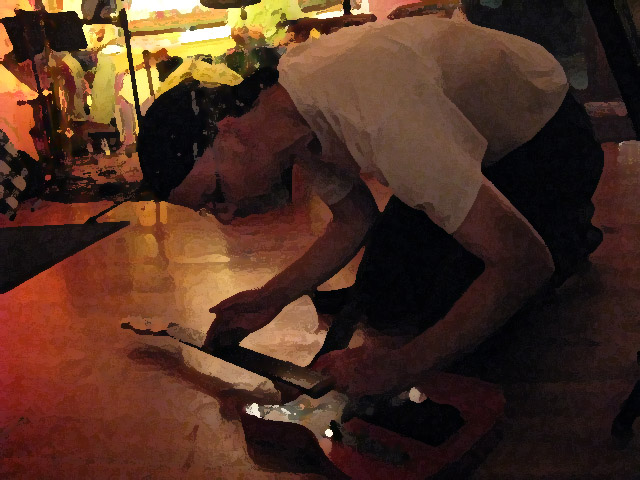 We don't need no stinkin' lyrics!

…just a drumkit, a bass, and a guitar. An electric guitar that is, that raw, raucous wild animal that can make a man cry or send a crowd careening around the room like a carousel broken loose from its pinnings.

And the man onstage with the electric guitar—if you can see past the dancers to get a look at him—he's known as Tiger. A southpaw, he wears a slide on his right pinky and a smile on his face. He plays a note, shakes the slide along the string, creating a wicked vibrato. His smile broadens. No question, he loves what he's doing.
Bill Bois on the bass is smiling too, and so is

Jed Smith as he slams the drums; that's a rockin' rhythm they got going, judging from the dancers' enthusiasm.

Tiger strikes the string again, ferociously, and the notes come screaming out of the amp, an ol' tube amp that Tiger built himself. He makes his way to the edge of the stage, then leaps onto the dance floor. With his guitar he's teasing the dancers, stalking the audience. He whips the guitar around and plays it behind his head—cool enough, yeah, but we've all seen that. Wait—he's dropped the guitar! No—he's got it on the floor and he's playing it somehow. The dancers circle round, the rhythm sections eases up, dropping the volume down low, so low that for a moment you could almost hear somebody whisper. Those in the audience that are still sitting get to their feet so they can see, curious about what's going on. Is Tiger licking the guitar neck? No, no, he's playing slide, holding the slide in his mouth! Now he's playing with his foot!

Jed and Bill lean into it a bit harder. More people are standing, crowding around, craning their necks to watch. They see the slide hit the ground and Tiger flip the guitar over. Now the guitar is face down, strings on top of the slide. Starting low, Tiger slowly pushes and shakes the guitar over the slide, the pitch rising, the rhythm and volume increasing, the tension swelling. Tiger keeps pushing the guitar along the floor, the slide moving simultaneously up all six strings. People are hollering, whistling, shouting, jumping. Tiger's bouncing the guitar on the slide, pushing the pitch ever higher, the bass and drums pumping and thumping harder and harder. Then the guitar is suddenly back in Tiger's hands, and he's on his feet, jumping up and down in time with the music. Some people jump with him, some just stand there grinning from the sheer pleasure of the spectacle and the music.